It’s one of those things you just didn’t plan but that stays with you for long after your surf trip is over. Out of the big blue, coasting the south westerly currents off Huvadhoo, a green sea turtle glides silently a few meters beneath Olivier’s dangling legs.

Olivier is on the lookout for the next wave and, at that moment, is unaware that he is being examined by a reptile whose ancestors were already swimming around 150 million years ago. So long ago, in fact, that they watched dinosaurs evolve and become extinct. No wonder the ocean-bound visitor isn’t too impressed by the delicate human floating on the surface, despite all the harm we have collectively inflicted on its species over the past century.

Laurent Masurel, the photographer of this Surfatoll trip, is not quite yet 150 million years old but has over 20 years’ experience in award-winning marine and surf photography. As comfortable as a turtle in the sea, he gently maneuvers into the animal’s slipstream to snap a photo of this brief but timeless encounter. Is the timing sheer luck, or did Laurent’s sixth sense tell him to take a break at that precise moment from shooting the boys on their boards and to dive below the breaks? Regardless, just as the reptile glances back at the submersible camera, Laurent secures an invaluable souvenir for Surfatoll’s wave-intoxicated customers. Had our ancient ocean-bound friend known that his portrait would enliven two full pages of the May publication of Surf Session magazine, he surely would have smiled wider. 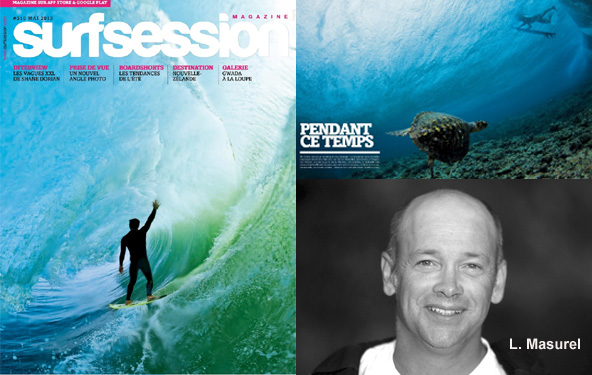 In the meanwhile, the seven Frenchies are busy getting as stoked as coals on fire on the perfect surface swell. Really perfect, like on the vast majority of days here, simply because the Southern atolls are the very first landmass against which the south westerly swell breaks as it flows up from the remoteness of the central Indian Ocean. Reaching Huvadhoo and Addu, it meets the second ingredient of perfection, the steady north easterly winds characteristic of springtime in this area, and rises to shape unspoiled surf havens such as Five Islands, Tiger Stripes and Bluebowls (see descriptions and characteristics of these spots and many others on: www.surfatoll.com). The waves in Huvadhoo are powerful, albeit more forgiving than those further South in Addu which tend to be more technical, sharper and shallower, for experts only.

Marc, Christopher, Maurice and the four others are really eager to get some good shots in the box, not least to prove to their better halves that they truly were surfing in a remote and nightclub-less spot in the Southern Maldives, in no other company than that of the male crew and the occasional female fish (no mermaids though). Primarily, however, they were wary of coming home with one terminally sea-soaked prosumer camera and a bunch of stale, motionless pictures of themselves in awkward looking positions. We all know how an ill-timed shot can destroy the last traces of credibility you may still have in the eyes of your surf buddies. Laurent teases the boys by reminding them that he usually shoots superstars like Kelly Slater and others of the sorts. Their ego slightly bruised at first, the Frenchies cunningly turn the situation to their advantage by flattering Laurent into sharing tips to improve their style. 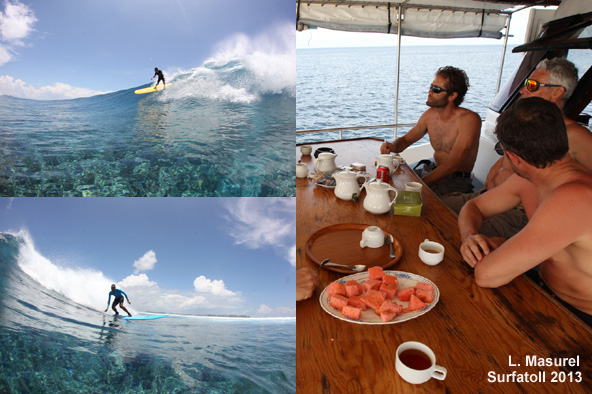 Session after session, the boys feel like it’s Christmas Day before their younger siblings were born: they don’t have to share their toys, or in this case their waves, with anyone else. For six days in a row, not a stranger’s soul trespasses into this sun-drenched sanctuary crested with 2 to 2.5 meter waves on most days. No wonder it is so: Huvadhoo lies more than an hour’s plane ride away from Male, just above the Equator. It is so remote and well-preserved that not a single resort stains its pristine shores. In fact, the only way for surfers to revel in the creation-day beauty of this atoll’s coastline and rich marine fauna is to sign up to a surfari or live-aboard. So, with its 10 years of experience in the Southern atoll area, Surfatoll knows better than to waste surfers’ time in transit lodges. Instead, the crew immediately whisks the customers away from the local airport on to the charter boat, denying them enough time be assaulted by connectivity withdrawal symptoms. 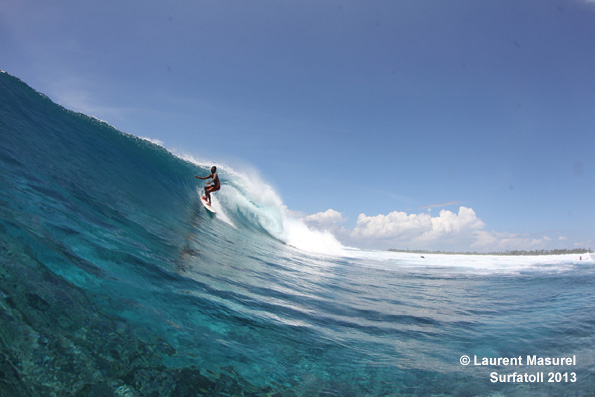 On the boat, the obliquing late afternoon shadows sound the charge for the last session of the day. Bertrand and Bruno jump into the dinghy which shuttles them from the boat to the dhoni conveniently stationed next to the break while the others, back and shoulder muscles pumped out, kick back in the deck chairs, pass around the frost-coated bottles of Tiger beer and eagerly wait for Laurent to download the day’s photographic bounty onto his laptop. Basking in the purr of the ocean breeze, the metronomic lapping of the wavelets on the hull, and the caress of the setting sun, their connection with the natural surroundings is unadulterated. After a week in blissful seclusion, rising and setting with the earth’s natural cycles, the group of friends can’t help notice that the very last traces of stress have simply dissolved. 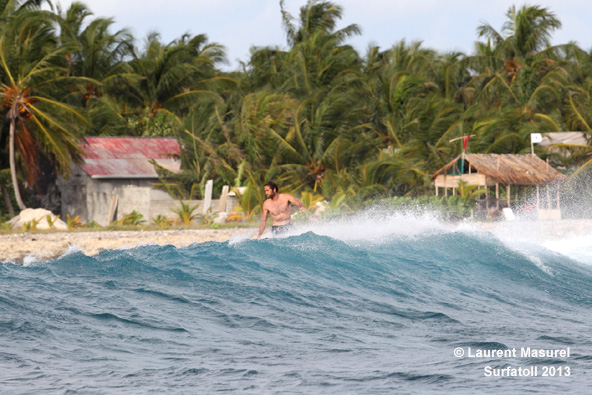 As the boys onboard review the day’s best shots, a few of the crew travel ashore with the previous night’s catch, a pair of toothy barracuda and a couple of skipjack tuna, to prepare this evening’s barbecue dinner. An hour and a half later, awestruck by the star-loaded night sky, the surfers land on the torch-lit beach. To their surprise and amusement, they are invited to sit around a surf-shaped table sculpted in the white sand, courtesy of the tireless and imaginative Surfatoll crew. 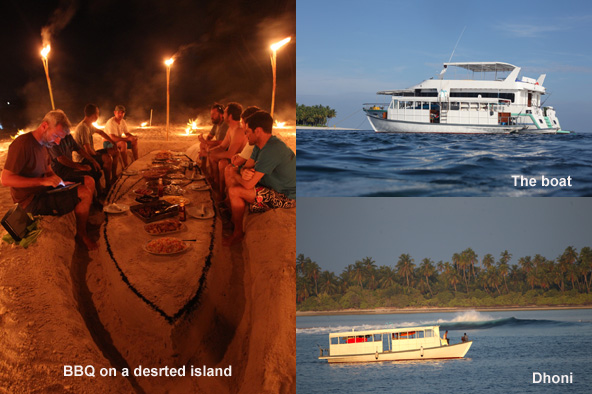 The group’s banter about the day’s remarkable runs and wipeouts and ethereal encounters with sea creatures slowly gives way to the clink of forks and knives and the coordinated munching of happy hungry men feeding off what the sea has offered to them. By silencing a pack of alpha males into the wonder of the passing moment, Surfatoll has pulled it off once again. This really is the ultimate surf adventure.